How To Make a Sourdough Starter

As I wrote in my last post, sourdough bread gets its tang and lift from a starter of flour and water that provides a host for wild yeast and beneficial bacteria.

I’ve always been given my starters by other people (thanks, friends). But because some of you don’t have one, and because I was curious on how to make my own, I decided to start from the beginning. Flour and water, my own captured wild yeast.

Turns out there is a lot to learn about starters, and a lot of myths to dispel. What seems to be a simple process of mixing water and flour can turn complicated. People start talking about hydration levels and bacteria formation. I can see why sourdough seems intimidating. So let’s start at the beginning, with the explaining and the dispelling of myths.

Moving on from flour, let’s look at water.

I’ve always used tap water to feed my starters, and haven’t had any problem with it. One of the books I’ve read said if you don’t mind the taste of your tap water, it should be fine for your bread. However, depending on where you live, there may be things in the water that are not great for tender little starters. Most people recommend using spring or filtered water to start (bottled, from the store, you don’t need to go out and track down a spring). Don’t use distilled water.

The third part of the equation is environment. Any baker will tell you temperature is important. When it’s warm, bread rises faster. When it’s cold, bread rises more slowly.

To nurture a sourdough starter you need a warm spot. Some people have protected little corners behind the fridge or by a heater. You might want to hunt around and see if you have something like this. A thermometer is a good thing for temp checks. Depending on what book you read, they will give you different numbers, but somewhere between 70 and 80° F (21° to 26° C) seems to be a safe range.

Because my house is cold, I decided to keep my starter in the oven with the light turned on. This is pulling out the big guns, but it assured a consistent temperature. When I checked with the quick-read thermometer I use for meat, it was about 78° F (25.5°C).

From what I understand, you can successfully grow a starter in lower temperatures, but it will take longer. I’m not entirely sure I wanted to be that patient.

Actually, things are slightly more complicated than that. Or they can be.

But then I read a little more, including links posted by some readers here (thank you, Robyn). And it turns out there are some good reasons to consider pineapple juice.

When you make a starter of flour and water, you will see a big rise around the second day—it will start to bubble and you’ll feel excited and accomplished. After that things slow down and the starter sometimes gets stinky. This is where some people assume they have failed. The starter smells like garbage and isn’t expanding the way it did in the first few days.  A lot of people give up.

Thanks to the work of a baking microbiologist, we now know the early rise is not beneficial yeasts in action. The bubbles and the smell come from bacterial activity, a precursor to the yeast formation. If you wait it out the smell goes away and the yeasts kick in and all is good in the world (we hope). But imagine how many would-be sourdough bakers give up partway, thinking they’ve failed.

So I am no longer scoffing at the use of pineapple juice, which acidifies the mixture enough to prevent the growth of bacteria. You might want to give it a try. You won’t get the early exciting action, but you can also skip the foul smell and the slow period that makes people think they’ve failed.

I had already started using water when I discovered this, but if I were doing it over I might try pineapple juice instead (unsweetened, room temperature). Of course, if you’re prepared for the smell and the still period you can ride it out and not lose faith. With a little knowledge, either way is fine.

Okay, let’s get started. The starter method I like the best is outlined in a post on The Fresh Loaf, a community website for bread bakers. It’s based on the method in Peter Reinhart’s respected and well-loved book The Bread Baker’s Apprentice, but uses smaller measurements and thus less wasted flour.

Mix the water/juice and flour in a glass bowl or container. It will look thick and glue-like. Mix completely so the flour is fully hydrated and cover loosely with a top (don’t seal) or with plastic wrap. Set it in your warm spot and let it rest twenty-four hours.

You might want to mark the level of the starter on the jar, so you can see if it expands.

Your starter shouldn’t look all that different on day two. It should still look like  kindergarten paste. Not too appealing. There may be some bubbles forming that you can see through the glass container, but it won’t have grown much in size. That comes next.

Mix in the water and the flour, stir well, and replace the cover. Mark the side again. Things will begin to get interesting soon.

It’s alive! It’s alive! If you’re using water in your starter, this may be the day you begin to see action. As you can see from the mark above, the starter more than doubled in size. This is exciting.

You may also being to notice a smell. It may smell awful. Like garbage. Fear not. This putrid smell should go away.

If you are using pineapple juice, you should not notice much of a smell, but you might not have as much bubbling activity either. Trade-offs.

Stir up the starter, you should begin to see some webbing happening under the surface—spider web-like strings formed by the bubbling action. This is a good sign. If the top surface has dried, just break it up and stir it back in.

Once you’ve stirred it up, throw away half of the starter (estimate based on sight) and add the new flour and water. Even if you’ve been using pineapple juice up to this point, it’s time to switch to water. Mix completely and cover again.

There are more days to come, but I’ll leave you for now. Get your flour ready and give it a try. It might sound a little intimidating, but it’s easier than you think.

Mix with half the starter (throw out the other half).

Day four was my waterloo. When I woke up and checked, the starter hadn’t increased much at all. It certainly hadn’t doubled. And yet, I was supposed to wait until it doubled to add the four and water suggested for day four. Also, it still smelled bad. I can understand why people give up at this point.

I was very glad to know this might happen. Again, if you used pineapple juice, you might not be dealing with this slowdown and bad smell. See our previous post for more information on that.

The instructions I was following said you could add a bit of rye flour to boost activity, so I put in two teaspoonfuls of flour and a teaspoon of water and mixed it up. Then I put it back in the oven and hoped for the best.

Happily, when I woke up the next morning (now officially day five), the starter had doubled (see below). It had actually peaked while I was sleeping, but I could see from the marks left on the glass how high it had gone.

I mixed in the day four additions and carried on and all was well. Lesson to learn: the starter is in charge. Don’t rush the timeline. Wait for the starter to double before moving forward.

Mix 1/4 cup of starter with the flour and water, throw out the rest (or give to a friend!).

Once you stir in the day five additions, your starter should double again. Mine happened quickly, in less than six hours, though it really depends on the temperature your starter is being kept at. Once your starter doubles the second time, you can consider yourself a successful starter parent. Congratulations!

While your starter is now established, it will continue to strengthen and develop its flavor as time goes by. When you first use it, you may be disappointed that it’s not sour enough. Give it a few weeks and this should gradually change.

As far as maintaining your starter, it really depends on how often you want to use it. I bake about once a week, though sometimes not that often. I keep my starter in the fridge, taking it out the day before I want to use it and feeding it.

I do what is called a 1-1-1 feed, which means I add equal amounts starter, water, and flour. The following day I remove what I want to use, feed the starter again, and put it back in the fridge until the next time. It’s a good idea to feed your starter weekly, though to be perfectly honest I have let my starter languish in the back of the fridge for more than a month. It does take some regular feeding to get it back to full strength if you’ve ended up neglecting it.

Some people, including those who want to bake on a more regular basis, leave their starters out at room temperature. You’ll want to feed it on a daily basis if you do that, discarding roughly half the mixture and feeding equal amounts water and flour. This seems like a good way to blow through a lot of flour, unless you’re going to bake on a near daily basis.

Some things you might want to be aware of: your starter may develop a dried crusty top if you are leaving it out on the counter. That’s fine. You can either break it up and stir it back in, or have that be part of the starter that you discard. You may also notice the starter separate and develop a clear liquid layer at the top (sometimes with foamy bits of top of that). That’s fine too. It’s called “hooch” and you can just stir it back in.

And that’s it! Some people think you should wait awhile before you use your starter for bread, others say go ahead and start playing now. I decided to go for it, and made one of the best loaves of bread I ever have. I’ll tell you about the recipe next week,  but just to urge you on, here’s a picture of what I pulled out of the over this evening. Yum.

Are you with me? Sourdough or bust.

Any questions—leave them in the comments. And feel free to pipe up with your own experience. I know some of you are old hands with this stuff. Let’s share the knowledge.

One thing to note: if your starter is being kept at a cooler temperature, it may take longer for these changes to happen. Don’t lose faith. Perhaps just find a warmer spot. 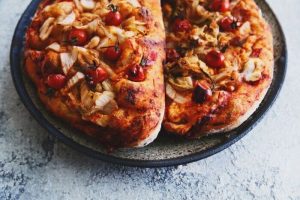 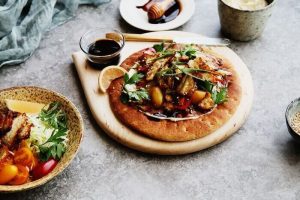